This could be a multi-part blog series. And it has nothing to do with the People issue that just came out, though Bradley Cooper was a nice choice. Instead, it has to do with the theater weekend I just had in New York. I saw three shows, all of which featured handsome men. Paul Gross in Private Lives, Alan Rickman in Seminar and Hugh Jackman in Hugh Jackman Back on Broadway. My focus for this post is Hugh Jackman. 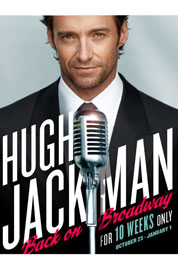 I have seen him in the movies. And I have watched him host the Tonys. But I had never seen him live. And while I was prepared to enjoy the show, I was not prepared for how enormously talented Hugh Jackman is. He is charming and charismatic and has a nice singing voice. But it is the dancing that got to me.

I love old movie musicals, with a very special place in my heart for Fred Astaire, with Gene Kelley coming in a close second. I love their easy way of telling a story through dance, and layering romance with athleticism. Hugh Jackman is that kind of dancer. Lovely, at ease and really, really good. Truly a talent that may have been better served in another era, when he could have made some movie musicals a la Gene Kelley (or Fred Astaire). Wolverine the Musical? I don’t think so. But maybe take his Wolverine cache and make a big old fashioned musical with production numbers? A girl can dream.

Hats off to Hugh Jackman. You surprised me.

What do you think? Let me know? Cancel reply